When did you last admit you were wrong, totally and utterly wrong? In my case, that would be right now. Here is the retraction.

A a few weeks ago I sat down to try and figure out how Global Warming will affect me personally and my family. I wrote it down in this post. It all didn’t sound so bad.

But that was only because I committed the cardinal sin of attempting to analyze a complex system by analyzing only one part of the complex system, and assuming the rest of the system would remain unaffected. This is about the world’s climate, after all! It’s everywhere and thus affects everything. Assuming “the rest of the system remains unaffected” is an utterly wrong assumption.

In my (very weak) defense, most everybody else, including lots of climate scientists basically commit the same mistake (such as those writing the recent climate change report for the Intergovernmental Panel On Climate Change, as alluded to by Jeremy Leggett’s transcript of climate scientist Hans Joachim Schellnhuber’s recent remarks to the Club of Rome). But we cannot afford doing that, so I need to write about what I learned since.

Here’s how I realized that I was wrong. After my post, my friend Heather Vescent reminded me of the Club of Rome 1972 landmark study “Limits to Growth“, which I still hadn’t read. Fortunately, it is available on-line as a scan or scan and transcript. If you haven’t read it either, I highly recommend it, regardless what you think about the climate. Among other things, it is an extremely readably introduction to the non-obvious behaviors of complex systems that incorporate feedback. Personally I think this kind of thing should be taught in high school, but it isn’t, to our detriment. But I digress.

This “Limits to Growth” study was done at a time when computers were still novel, but engineers had starting applying them to simulate complex systems, such as the differential equation systems describing analog circuits or complex mechanical machinery, in places such as MIT. (This is where the term “cyber” comes from, by the way: from the term Cybernetics, the original name of this field of study.) While the math for simulating such complex systems had been known for a long time, pencil and paper only lets you solve equation systems with a handful of variables, otherwise the equations are simply unmanagably large. Now (this is the early 1970’s), computers had become powerful enough to numerically integrate equations with dozens or even hundreds of variables. And those guys at MIT who spearheaded “Limits to Growth” decided to apply the same method to “the world”, on behalf of the Club of Rome.

Note that they didn’t apply it to “the climate”. They didn’t make the same mistake I made recently. Instead, they created a model, called World3, for the world as a system, which recognizes that many things are inertwingled, from energy use to resource availability to population to economic growth to climate and so forth, and lots of things impact each other in non-obvious ways. One can only trust one’s predictions if all major relationships are taken into account. Here is the overview diagram of the model:

While this diagram may not look like it to the untrained eye, the “World3” model was exceedingly simplistic. For example, they did not distinguish between regional differences in the world and only used world averages for things such as the level of resource consumption or industrialization. Very obviously, a model that simplistic can only get us this far. It didn’t have global temperatures either, just “non-renewable resources” and thus cannot tell us anything directly about the climate. Today’s climate models are certainly millions (and that might be a gigantic understatement) of times more complex. However, they did one thing that we all forgot since, apparently, and that is simulate the entire planet, as a closed system, instead of just a part of it: a closed-loop system with internal feedback, not an open-loop one without the outputs influencing the inputs.

The results of their study shook the world at the time: basically whatever combination of reasonable-sounding parameters and assumptions they plugged into their model, the model almost always predicted collapse some decades in the future in some key measures, such as world population. To this day, people argue very passionately that this clearly must be wrong.

The key modeling insights they reported — and that is a now well-known characteristic of these types of cybernetic systems — is this:

Which caused me, obviously, to ask: what do modern versions of the “Limits to Growth” “World3” model tell us? You would think that given how influential that study was, how much better our computers are today, how much more data we have, and how important this subject is, somebody somewhere would have created a “World3000” model. But after hours and hours of web searching, I came up with nothing! Not even secondary references to such models. Perhaps they exist, but if they do, they are hiding very well. (Know of any? Please, by all means, tell me about them!)

To be clear, there are many extremely detailed climate models. The detailed modeling clearly continued as I would have expected, but only about the climate! The rest of the world system is generally left out.

This was one of these “Oh shit” moments for me. When you realize that you made a cardinal error in your amateur analysis, which likely renders your results useless, only to notice that the experts, backed by gazillions of dollars, and advising the governments of the entire world, commit the same error.

I do not have a “World3000” model in my back pocket. It would take a lot of effort, and a lot of data gathering to create one. So I can only attempt to see what impact the general results from the “World3” model have on the asumptions of today’s climate predictions, and come to the following conclusions:

So a hypothetical “merged” model, consisting of today’s climate models and the dynamics inherent in World3 does not change the fundamental predictions made by World3. The time lines may be a bit different, and some variables may have somewhat different values. But collapse it still the most likely outcome for the simple reason that we do not have the ability to react as quickly and massively any more as is needed to avoid collapse.

And it has already started IMHO. Here is a graph from a report of the World Health Organization last year, quoting the FAO: after successfully reducing hunger over some years, undernourishment world-wide is back on the rise: 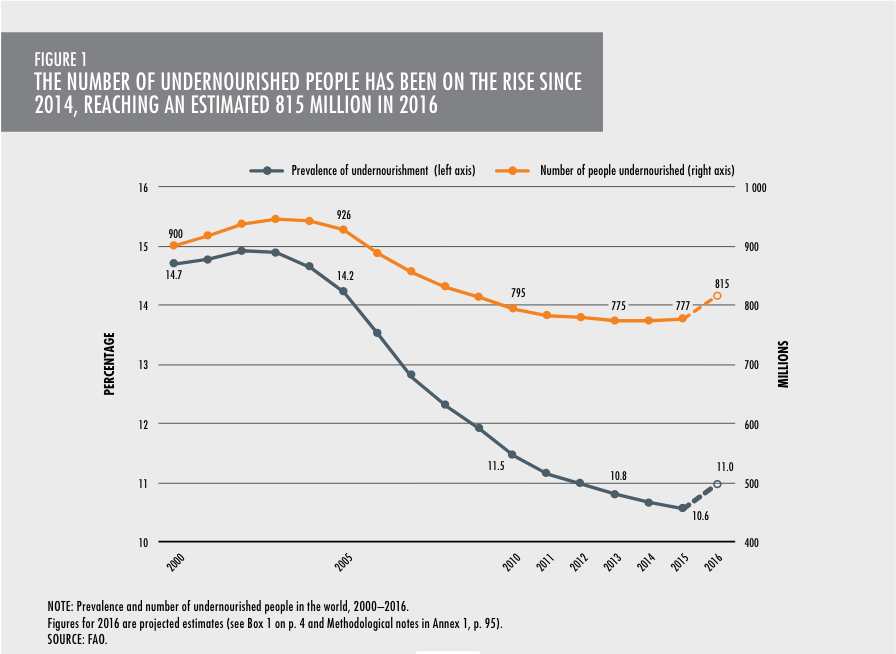 Just why would that be?

I’ll leave you with the output of the “standard run” of World3, in all of its 1970’s mainframe typewriter graphics glory. The solid line is the one you want to ponder first, and just what exactly the situation on the ground looks like when its slope suddenly starts going down. 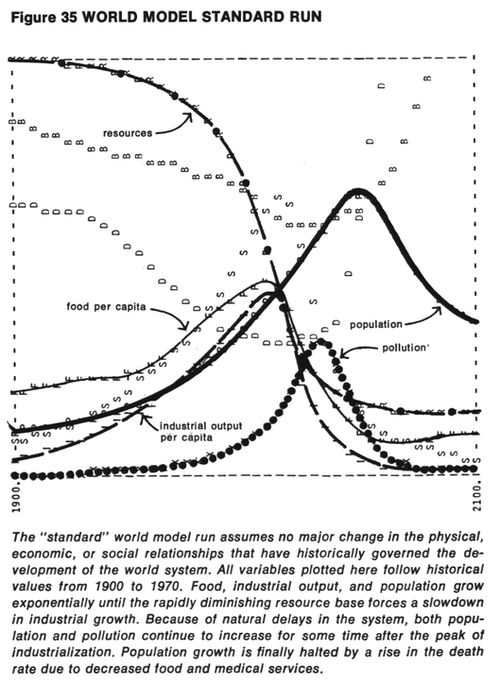 Where we are on that timeline I don’t know. Tell me again why a modern version of the “World3” model does not exist?

But regardless. What now?