Back in the days when I went to (the German equivalent of) high school, we had to write the famous “Facharbeit”: a thesis in the field of your specialization for which you had a whole year. I wrote about infrared remote controls and built a bunch of electronics — which was great fun, except that my physics teacher was completely out of his league attempting to evaluate it. (After all, it’s only first principles in physics that apply to electronics.) According to Wikipedia DE, it’s still part of the curriculum. But I digress.

Here’s an idea for a project that somebody motivated could do at this level — and perhaps as a junior-level thesis at college, in mechanical engineering, and that would be very useful to lots of other people with 3D printers:

Experiment with and document the tolerable stresses of various shapes of 3D-printed connectors. 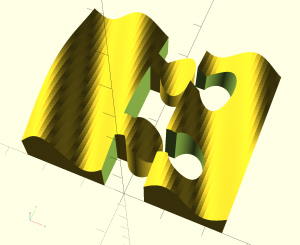 I’m not a mechanical engineer, but my understanding is that there are big books in mechanical engineering that list the mechanical properties of lots of things, such as screws, bolts, and various connectors, parameterized with temperature, material and things like that.

It would tell you thing such as: if you take a bolt of type M4 made from stainless steel of type S, with tolerances T, the maximum force it can take is X Newton along its primary axis, but only Y Newton of shear (“across”) forces.

Imagine you design the Golden Gate Bridge. Would such a book be useful? You bet! In fact, I much rather not drive across your bridge unless you used a book like that quite diligently for every part of your bridge design!

Does such a book exist for 3D-printed parts? Not that I can tell. Certainly I have not seen it, or seen it referenced. So the point of the project would be to research what loads various 3D-printed connectors can take, and document them, and I guarantee that many hobbyists — and probably professionals — with a 3D printer would reference it for years to come.

Here is how I would go about it:

The thought occurred to me because I just created an OpenSCAD (a mechanical CAD tool often used for creating 3D-printable parts) library that lets you cut your parts in arbitrary shapes, and I’d love to know which shape of cut I should use for a part I’m working on, and I have no clue.

Oh, here’s the cut library: https://github.com/jernst/openscad-cuts. And the picture above is one of the cuts (a “puzzle cut”) that it knows how to create.